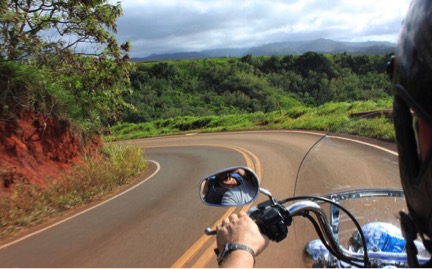 I’ll never forget my first ride on a Harley. I was ten years old and it was a beautiful summer day in central Pennsylvania. I smiled wide and hung on tight as we roared through the hills and curves along the Susquehanna River. The engine rumbled magnificently as the leaves of the trees blurred into a lush sea of green. That afternoon, my lifelong yearnings for freedom, adventure and independence were born and Harley Davidson became my two favorite words.

As I grew older, though, I began to question Harley’s image of independence. I was raised here in York where the legendary motorcycle manufacturer has assembled its bikes since 1973. So I couldn’t help but notice the company’s repeated dependence on government assistance. Harley has relied on state or federal taxpayers for handouts at least three times in the last three decades. Just since the year 2000, reported Bloomberg, “the motorcycle manufacturer has benefited from $54.5 million in local and state subsidies and more than $2 billion in federal liquidity support.”   Instead of “Live Free and Ride”, the company’s behavior implies a motto more like “take a free ride”.

That doesn’t seem to jive with the independent spirit that Harley Davidson has championed.   It takes some real contortions for the company to push an all-American image of self-reliance while at the same time asking for handouts from taxpayers.

During the last several decades, I’ve also watched as the Harley’s management team took actions that lowered the standard of living of workers in our community. These were loyal employees who once represented the company’s core customer base. One can’t help but wonder who exactly is going to buy these motorcycles if companies like Harley Davidson continue to drive down the real wages of American workers.

This is especially troubling when do you consider that those same workers and their fellow U.S. taxpayers are handing American corporations a staggering $80 billion in subsidies each and every year. Just google “explore government subsidies New York Times” and check out the subsidies your own state.

But this is about more than corporate America reducing wages. Huge companies are in the process of completely discarding as many people as they can and Wall Street rewards them for it.   Last year Harley Davidson’s stock went up 7% in one day. Analysts indicated that this sharp increase was due to the company’s announcement it was going to lay off a large number of people. Wall Street may have been pleased but the families in my community were not.

The executives at Harley will tell you that sales are down and they had no choice but to eliminate jobs.   But they did have a choice. They made that choice long ago when they joined the leaders of other large corporations in the effort to systematically reduce the real wages American workers. Factory workers who once could afford to buy things like Harley motorcycles found themselves severely squeezed. It takes a lot of nerve, then, for Harley Davidson to use the fact that consumers can’t afford their products as an excuse for layoffs. This is especially true when you consider that U.S. taxpayers provided Harley with assistance after the 2008 financial crisis while American workers were left out in the cold.

Of course, it’s not just Harley Davidson.   Corporations across the country are cutting their workforce. Around the same time that Harley gave Wall Street their “good news” about layoffs, Bank of America gave more “good news” to Wall Street. The bank made a $5 billion profit in a single quarter and analysts cited the the bank’s major layoffs as the main reason for the huge gains by the company.   Not innovation. Not great products or services. Just layoffs.

Why do huge corporations and Wall Street thrive when people suffer?   Our economic system seems to have been corrupted.   After all, if human beings don’t benefit, what’s the point?   It doesn’t matter whether you’re a republican, democrat, green or libertarian. It should be very disturbing to all of us that our system often thrives on the suffering of our fellow citizens.

More and more of the wealth of this country is being consolidated into fewer and fewer hands.   According to the Nation, “20 People in the country now own as much wealth as half of all Americans.”

At the same time poverty is growing at an alarming rate. 4 out of every 10 children live below or near the poverty line.   And the safety net for Americans who fall through the cracks is wearing thin.

According to a study published recently by CBS News, 78% of workers in America are now living paycheck to paycheck. And each year that percentage is increasing.

PRODUCTIVITY HAS GONE WAY UP BUT WAGES HAVE REMAINED FLAT.

To make matters worse, we have a serious shortage of affordable housing. There is not one state in the U.S. where a person working for minimum-wage full-time can afford an apartment at all at 30% of their income.   How did we arrive at such a place where hard working Americans do not share broadly and fairly in the gains of our society, gains that come from their hard work and ingenuity?

To add insult to injury, the Citizens United Supreme Court decision has allowed the same few individuals and corporations who control such a large portion of the country’s wealth to donate unlimited sums of money to political candidates.   It’s no surprise then that those politicians turn around and work hard to maintain the uneven playing field where almost all the benefits flow into the pockets of their benefactors.

It’s also frustrating that an enormous number of large corporations are keeping trillions of dollars offshore to avoid paying their fair share of taxes.

A similar maneuver is used in the U.S.   For example, hundreds of thousands of corporations list their “headquarters” as a small non-descript building in Wilmington, Delaware. They do this to avoid paying their fair share of taxes.

The New York Times describes the tiny building at 1209 North Orange St. as “the legal address of no fewer than 285,000 separate businesses. Its occupants, on paper, include giants like American Airlines, Apple, Bank of America, Berkshire Hathaway, Cargill, Coca-Cola, Ford, General Electric, Google, JPMorgan Chase, and Wal-Mart. These companies do business across the nation and around the world. Here at 1209 North Orange, they simply have a dropbox.”

Other corporations that claim their headquarters is in this same little building include General Motors, Kentucky Fried Chicken, Verizon and Deutsche Bank.

At the same time as they are avoiding paying their fair share, leaders of major corporations expect the roads and bridges and other infrastructure of their states to be in great shape.   They also expect a well-educated workforce despite those corporations’ complicity in starving public schools of resources.   They also complain about high corporate taxes when their practices of hiding their profits in places like Wilmington actually drive up the tax rate. In Pennsylvania, for example, if Hershey and other large PA corporations didn’t hide their profits in Delaware, then our state could have one of the lowest tax rates in the nation.

Large corporations tend to do everything they can to privatize the profits and socialize the losses.   External expenses like road, bridges, health and environmental costs due to pollution, education for a top notch workforce. . . They just “externalize” those costs by passing them onto the public. But the profits, of course, are not shared. This may make the analysts on Wall Street happy but it is a practice that is busting our budgets and hollowing out our middle class and our country.

Corporate leaders follow Grover Norquest’s lead in working to make government so small that they can “drown it in a bathtub”. But then they complain when that same government does not maintain the infrastructure and education systems they need to operate a healthy business.

This duplicity gives one of the same nauseous feeling we Pennsylvanians experienced in the pit our stomachs when Harley Davidson successfully held our state hostage a few years ago. Executives demanded taxpayers give millions of dollars to the company in order to keep the corporation from leaving the state.   These same executives flew south in their corporate jets to “explore new sites” and issued press releases threatening to kill Pennsylvania jobs if the company wasn’t given huge incentives to stay.   Our political leaders blinked and we the taxpayers opened up our wallets for Harley.

After those concessions from Pennsylvania taxpayers were secured by the company, the leadership of Harley Davidson had the nerve to then go to the citizens of Wisconsin and pull the same stunt. Now it’s our turn to complain about the educational system. What kind of Ivy League college and MBA programs produce executives who think in such selfish, shortsighted and cruel ways?   After all, the tactics of these executives at Harley Davidson, Bank of America and countless other huge corporations end up harming the very communities that provide the environment in which these businesses thrive.

Despite what we may have been told, corporations are not people.   But shareholders are.   And eventually, shareholders will see their public schools starved of resources, their roads and bridges crumbling, their family members and fellow citizens laid off, their health and their environment threatened. They’ll also wonder “Who is going to pay to correct all all these problems?”   When they call 1209 N. Orange St. in Wilmington for answers, their messages are unlikely to be unreturned.   After all, the poor receptionist in the lobby of that small building has to answer the phones for 285,000 companies.

Once shareholders realize that a significant portion of the cost of doing business has been dumped on them and their communities, then maybe, just maybe, those human shareholders will say “Hang on.   Our communities matter.”

Until that day, the corporate executives making $13,000 per HOUR (and the Wall St. firms that continually rate their performance) will continue to call the shots. Unfortunately, the decisions they make will most likely bring further harm to the very communities that shareholders and their fellow citizens call home.

Those communities might not matter to corporate America. But they sure as hell matter to Americans.

CHECK THIS OUT SOME GOOD NEWS AT THIS LINK!

12 REASONS TO HAVE HOPE:   We’re going to turn this world around.

For more information on how we are getting the shaft due to a corporate takeover of our Congress, please read this article:   “THE MOST DESTRUCTIVE POLICY YOU’VE NEVER HEARD OF”